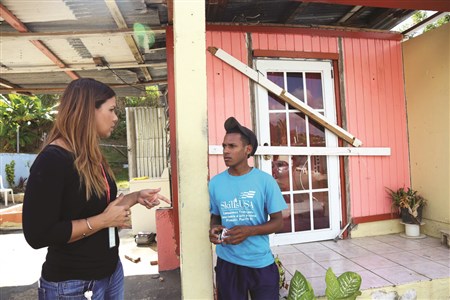 One year into a partnership with the Iglesia Metodista de Puerto Rico, the Missouri Annual Conference has made considerable progress in helping with the recovery effort from Hurricane Maria. Rev. Lucas Endicott, Senior Mission Strategist, reported the Conference has nearly met its fundraising goal of $150,000. This year, nearly 50 work teams from the Conference will travel to Puerto Rico. In fact, the Missouri Conference has sent 25% of all the teams from across the denomination which have gone to Puerto Rico.
“Behind all these statistics are stories of transformation. While we have been helping rebuild, we also have benefitted greatly from our brothers and sisters in Puerto Rico,” he said.

A representative from the Iglesia Metodista de Puerto Rico, Glorymar Rivera Baez, expressed thanks for the Missouri Conference’s participation. She grew up as the daughter of a Methodist pastor and thought she knew what connection was. But the idea of connection is abstract, she said, until you see it in action. “I truly understood what a connectional system is after Hurricane Maria,” she said. “The response from Methodists around the world, but particularly from the U.S., was wonderful.”
The Puerto Rico church received communication and prayers from throughout the connection. One of the first was from Endicott and the Missouri Conference. Baez said they thought they were prepared to respond to a disaster, but after Hurricane Maria, the devastation was so extensive they were unable to open a single collection or distribution center.
In addition to response from several United Methodist conferences, the Puerto Rico church is working with UMCOR and FEMA. They are doing work in 24 municipalities. She said more than 800 volunteers from across the Methodist connection have served in Puerto Rico.
The recovery effort has three areas of emphasis: recovery of communities, recovery of churches and development of a community outreach plan. “If we don’t have a healthy community system, when another hurricane or natural disaster hits, we will not have the capacity or the resiliency to respond,” Baez said. The church has trained 200 lay leaders to be prepared for any future disaster, with a goal of training 500 in the next year. “Partnership with the Missouri Conference has been very helpful in accomplishing these goals,” she reported. Learn more at www.volunteerinpuertorico.org.