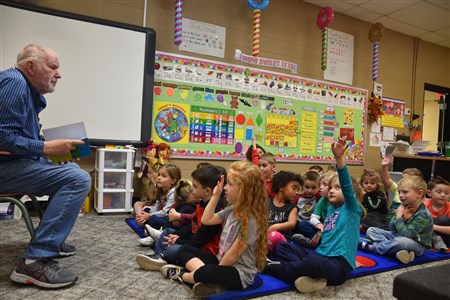 There’s an excitement in the air when volunteers from First United Methodist Church in Warsaw enter a classroom. The students are amped up, in a good way.

“You’re the guy who read the porcupine book to me!” one student exclaims in the hallway when he sees Rev. Loren Whetsell. The teachers share the students’ enthusiasm.

“Teachers love it when we come in,” Whetsell said.

Loren Whetsell has been at Warsaw for four years, and has been working with the local school on a literacy program for two years, since the Missouri Conference launched the Pathway Out of Poverty initiative. He is personally a lunch buddy, meaning he spends 90 minutes with the children every Thursday during lunch.

“You need to form a relationship with the school,” Whetsell said. “It takes some time to build trust.”

This year adult readers from the church have been reading with children. On a Wednesday morning in mid-November volunteers were reading at the South Elementary School at 9:40 a.m., 10 a.m., 10:50 a.m., and reading at the other elementary school the following day. The November book distribution was the second book distribution the church has done. In December they gave the children two books – the book they read and another as a Christmas gift.

“We started with the youngest readers, where we think a reading aloud program will help the most,” Whetsell said.

The church works in three areas: early childhood (preschool), kindergarten and early childhood special education. There are eleven classes of students at the local two elementary schools that the volunteers work with. Each month they are reading to 200 students, then distributing the books to them. The church, which averages 168 in worship, has 15 adult volunteers on its reading roster.
The church has received some financial support for the project from the Benton County Foundation. They keep the cost to less than $3 per book and use a points program through Scholastic to stretch their dollar. Each distribution ends up costing about $500. The church has the goal of distributing 2,000 books this year – 10 to every student being read to.

The Warsaw United Methodist Church could not be more prominent in town, with its triangular building directly facing the county courthouse on the town square. Next door to it is the county jail, a historic, picturesque building, were it not for the razor-wire topped fence. It’s one of the oldest jails in use in Missouri. A new jail is being constructed on the south side of town.

The South Elementary School isn’t on the south side of town, it’s about nine miles south of the south side of town. Warsaw is located where Truman Lake abuts Lake of the Ozarks, and the lake channels have a way of making things more spread-out than they may be in other geographical circumstances.

From the parking lot view of the South Elementary School you can see for miles over rolling hills. The view is likely to include several cattle, both across the road and far away, but only a few houses. The picturesque town on two lakes makes for a great retirement spot.

Many people from places like Kansas City build or purchase a home there near the lake to use during their time off, and then move there full-time when they retire. That population means there are local services available, like stores and restaurants.

“Retirees are our fastest growing population,” Whetsell said. Cynthia Bollinger moved to the Warsaw area 15 years ago when her husband retired. “He likes to fish,” she said.

She had never heard of Warsaw, but liked the look of it and has enjoyed living there.

“I appreciate how our Methodist church has given me an opportunity to get out and interact with the community like in things like this,” Bollinger said. “As people get older and are no longer in the workforce, it’s harder to make connections with other people in the community.”

In November Bollinger was reading The Thankful Book by Todd Parr. “I’m thankful for you!” one of the children called out to Bollinger.

After she had finished reading to two classes, Cliff Saupe came in to read to the next one. Saupe had been principal at the school about 25 years ago, moving to Warsaw for the job after taking early retirement from the school he worked for in Illinois. He clearly enjoyed being back in the school – almost as much as the children enjoyed him being there.

“There are a lot of things to be thankful for. Try to remember some of them every day,” his book started out.