The inflatable obstacle course and water slides have been deflated; the rock wall has been packed up and put away; the campers have headed home and are ready for a new school year.

Another fantastic camping season is in the books. 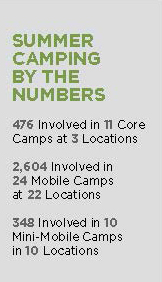 And what they saw was God working through the counselors and hosting churches.

Schaller recalls one hot summer afternoon when the counselors invited campers to step forward and commit their lives to Christ if they felt led. Fifteen kids came forward.

“I could see God working through that room and those counselors,” Schaller said. “After just four days of camp, these kids gave their life to God.”

At another camp, Varner remembers when a group of campers were hesitant to try the rock climbing wall. After finally mustering up the courage, they climbed nearly to the top but got spooked. The camp counselors encouraged the group to have faith and trust God. All of them were excited to try to reach the top again. Varner says he consistently saw campers who greatly admired and respected their counselors and their faith.

“Mobile camps served as a revival for so many communities and churches on a spiritual level,” Varner said. “Congregations were able to get involved with the kids and build relationships.”

Schaller agrees, saying that Mobile camps are so much more than one week; they’re about deepening and creating the lasting connection between the church and the community.

And there was revival and deepening of faith at Intrepid Camp, too.

At Intrepid, campers enjoyed hearing from Jeff Yalden and Big Al Cherry as well as playing 9-square and gaga ball, climbing the rock wall, tackling the obstacle course and serving at the Food Bank. Breakout sessions and small group time was sprinkled throughout the week and invited campers to pause and consider what God was doing in their hearts.

Schaller, who also participated in Intrepid, said the campers in his group felt closer to God than ever before during worship. Big Al Cherry’s Tuesday night testimony left a big impact.

“It was a time of personal examination and strengthening of faith for the kids,” he said.

And God moved at Mound Ridge and Little Grassy, too.

Themed Core Camps - focusing on everything from leadership to adventure - invited kids to enjoy a week in the wilderness at Mound Ridge or time away lakeside at Little Grassy. Activities included crafts and fellowship; fishing, catching crawdads and canoeing; scavenger hunts and pool time.

Camp counselors took time to make sure campers saw God in all circumstances. In one instance, a camper who harnessed up and walked to the ledge of the zipline platform turned back at the last minute. A counselor sat with her, wiped her tears and promised her God would protect her if she chose to branch out and try something new. Minutes later, the camper sailed down the zipline as the other girls at her camp chanted her name.

God worked through camping ministries this summer, and the staff is looking forward to God moving among the youth again in 2017.

As for next year, another full schedule of summer camping fun is planned. Intrepid will be from July 17-22, 2016. Varner says the outlook for adding more Mobile camps is very promising. A host of Mini-Mobile and Core Camps will also be on the schedule.


Where in Missouri is Mo?

Mo the monkey was so excited about camp this summer, that he decided to go to them all! See what Mo’s been up to this summer. #mogoestocamp