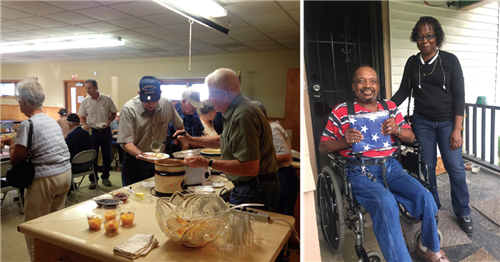 Many churches are engaged with various types of ministry with the armed services when war is at the forefront of the news, but fewer remained so when conflicts stretch on and the attention of the nation is elsewhere. The following is a small sample of how a few Missouri Conference churches remain active in support of the military and veterans.

Hamilton UMC has a men’s group that extends beyond the church, with members who are Baptist, Catholic and Mormon. They wanted to do something for young people going into the military and decided they would give devotional books to military personnel and first responders. Each book is prayed over specifically for a recipient of the book.

Their service can become much more personal. Recently an Air Force veteran and former Kansas City motorcycle police officer Donald Williams, who is now on hospice care, let the people at the VA hospital know he would like one last motorcycle ride. A Missouri State Highway Patrolman heard this, and contacted Bob Harper, Hamilton UMC member, with the request. Harper said he didn’t know how long the veteran might have, so he got right on it.

“We got the call on Friday afternoon and were at his house on Saturday morning,” Harper said.

Harper was joined by motorcycle friends from the Highway Patrol and the Gladstone Police Department. They put the Williams on the back of one of the patrolman’s trikes, and his wife rode with Harper on his trike.

They took a ride to A Little Barbeque Joint in Independence, where there is a commemorative wall dedicated to military and first responders. The owner came out and talked to the vet, then gave him and his wife their meal for free.

Harper asked the wife if her husband would like a devotional book, and she said she wasn’t sure that he would, but she would like to have one. They also presented him with a flag.

Recently the devotional book ministry has been expanded in a warm way.

"Since we are a quilting community and have a strong prayer shawl ministry, we are beginning to sew prayer cloths that will be given with these books as well,” Rev. Jenn Klein said. “This cloth is designed to be small and light enough to be carried in the cargo pockets of uniforms.”

The church is hosting an art and prayer workshop on November 4 for people who are interested in knowing more about these clothes and how making them is an act of prayer in and of itself.

Tipton UMC has an appreciation breakfast for Veterans each fifth Saturday. At the breakfast they have had service officers attend to provide information about benefits and programs of interest for veterans. The local state representative often attends to listen to concerns that the veterans have.

Northern Boulevard UMC in Independence has an outreach program called “Folgers for Soldiers.” People donate coffee, tea and hot cocoa, and it is mailed to military bases where the church has members deployed or has contacts with soldiers.

First UMC in Blue Springs keeps a list of members and friends of members serving in the military. It is in the bulletin each Sunday, and they are lifted in prayer for well-being. Each January the United Methodist Men send each person on the list a Strength for Service devotional book.

Lake Wappapello UMC gives money monthly to the Veterans Hospital in Poplar Bluff for grooming supplies and magazines for entertainment. The church shares a Bike Blessing event with the local Veterans of Foreign Wars (VFW) group each year.