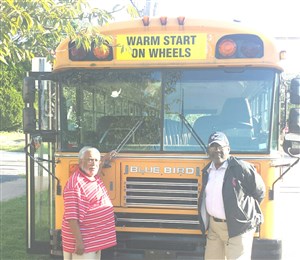 On a bucket list of things to accomplish: playing a flute is more sensible than buying a bus. Well not to Lloyd Ivy of St. Louis, Missouri. Lloyd is a lay member of Asbury United Methodist Church and President of the United Methodist Men in the Gateway Central District. Ivy says there are two things he wanted to accomplish in his life, “own a bus and play a flute." Well, one has been accomplished.

Lloyd’s summer began as times past, volunteering for Asbury’s Warm Start Summer program and working his full-time job. However, this summer was different. Pastor Ivan James reached out to Lloyd to secure transportation for a picnic outing and a movie. Lloyd called around town for quotes on buses for the four-hour time period. After securing a bus, Lloyd began perusing auction websites, curiously wanting to see the cost to purchase a school bus. He could not believe a school bus was available for purchase for nearly the same price he reserved the bus for the four-hour period. Lloyd didn’t believe what he saw, so he called.

“I mean this was right on time. It was as if God sent me this one”, Lloyd said. You see, Lloyd has thought about owning a bus before and regularly checks the cost to purchase a bus. “I could have easily bought one before, in other states, outside of Missouri ... but it never seemed like the time and the cost wasn’t right."

Now that Lloyd has accomplished his goal of owning a bus, what exactly are his plans for the 72 passenger vehicle? Well, it roots back to what Lloyd sincerely believes about churches in the Gateway Central District. He says, “We need to start doing things together. Individually, we are all (churches) trying to do things. It’s about time we pull our resources together, and we will have access to everything we want to do without the additional costs”.

Lloyd hopes that the free transportation service he will offer will help churches to come together and accomplish the needs of the community. “Often we talk about what needs to be done … planning, organizing, and meeting about the issue … by the time we get done talking the need passes," Lloyd says.

Lloyd won’t allow the needs of his Northside city church he is a member of pass him by. He plans to use the bus to expand the Warm Start program to other churches around the St. Louis City and County.

Warm Start is a program founded in Asbury United Methodist Church. The program, along with church members as volunteers, provides breakfast for kids in the neighborhood. During the fall and winter months, the program serves as a warm place to house students while waiting on their bus. In the summer, Warm Start provides breakfast, lunch and tutoring. Lloyd wants to provide this act of radical hospitality not just for the corner of Maffitt and Warne, but to more children living near and outside the neighborhood. “We can’t be that church on the corner just doing work for our community. We need to expand to other churches and we are going to use the school bus to do so. It’s church outside the building”, he smiles.

The extraordinary generosity doesn’t stop there. Lloyd plans to offer the bus as a free transportation service to all churches and Methodist organizations of the Gateway Central District. Whether it is picking up attendees for special church events, a bus trip to the Our Lady of the Snow Shrine to see the holiday lights, or the Methodist Men Retreat coming in the fall, these are just a few of the plans in store for the newly owned school bus.

Lloyd will not delay the start of the free service. The bus is purchased, owned, insured, and ready to be booked (free of charge) beginning mid-September. If you are interested in booking the bus for your large group (up to 72 children or 47 adults) contact Lloyd by email at lloydivy@netzero.com or by phone at (314) 680-2704 .

“We would like to start out with trips within a 60-mile radius," he adds, “People are excited about the new bus. Volunteers of Warm Start are jumping up and down. The Methodist Men are excited too. This is all about giving freely”.

For giving freely, he has.