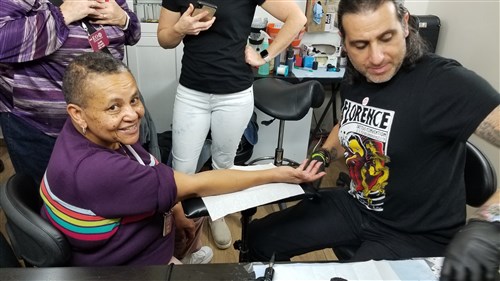 Eight Missouri Conference Residents in Ministry returned home from a trip to the Holy Land in December with a souvenir that will stay with them: a tattoo. Getting a permanent reminder of Jerusalem wasn’t a whim or an effort to be trendy. Quite the opposite, it was in step with a several hundred year old tradition.

The instigator of the inking was Rev. Jess Horsley, associate pastor at Kirkwood UMC. Getting a tattoo is nothing new for him. He got his first one when he was 18. As a Marine combat veteran who served in Iraq and Afghanistan, having his colleagues also get tattoos isn’t new for him either. But getting one in the Holy Land while joined by a couple of dozen other United Methodists from Missouri who were also getting tattooed to mark their pilgrimage was something special.

Horsley had heard about Razzok Tattoo from a pastor friend a couple of years ago. It is operated by a Coptic Christian family that has a 700-year history (27 generations) of tattooing Holy Land Pilgrims.

“When I found out the Holy Land pilgrimage would be the Residence in Ministry trip with the Bishop and the RIM spouses were invited to attend, I decided to invite the other newly commissioned pastors and those who were coming with us to get tattooed with me in Jerusalem,” Horsley said. “There’s nothing like a tattoo to remind you of an experience.”

Horsley believes God calls all people share their faith in ways they are each uniquely equipped – be it teaching, singing, serving others, hospitality, preaching, etc. Over the last four years, tattoo artists Laura Bonfonti and Jeremy Lambert at Cousin Paul's Tattoo in St. Louis have helped turn his arms into a visual story of his faith and beliefs.

“Many of the images on my left sleeve come from Scripture, including a large cross with the Greek alpha & omega symbols (Revelation 1), a seraphim (Isaiah 6), a dove inside a flame (representing the Holy Spirit at Christ's baptism & Pentecost) and images of wheat sheaves, a grape vine and grape bunches, a crown of thorns, a shepherd's crook and other symbols and words which represent the various "I AM" statements Jesus made in The Gospel of John,” he said.

There were about 20 people on the Holy Land trip who opted to get tattoos at Razzok, including the eight of the 11 who were there as part of the Residents in Ministry experience. These are people who have been commissioned for ordination.

Razzok uses stamps that are 25–500 years old to create the tattoos. Several of the people in the group who were tattooed there were getting a tattoo for the first time.