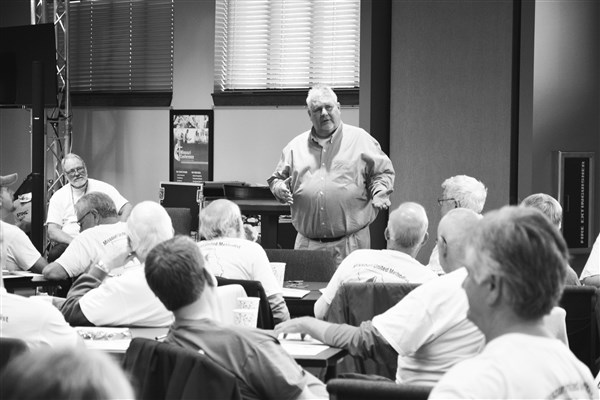 SUMMIT ‘2’ was a resounding success as close to 80 responders from throughout the state of Missouri gathered in Columbia on November 7. Greg Forrester, the Assistant General Secretary of UMCOR was the keynote speaker, traveling from the New York headquarters to meet with our response teams. Greg provided an overview of the domestic impact of UMCOR throughout the United States. He was particularly impressed with the Missouri Conference commitment to disaster response and the number of trained responders available. The conference warehouse is now serving as an UMCOR satellite depot.

Tony Richards, a leadership development speaker, who has served as a consultant to Ronald McDonald house and the Big Brothers/Big sisters program, spoke on building and maintaining volunteer teams and the impact of effective leadership. Audrey Phelps, the South Central Jurisdictional Coordinator, also provided perspective on conferences working together during crises and created a video, capturing the spirit of the mission. Other important highlights of SUMMIT ‘2’ were the drawings to support local teams and Real Life activities that involved team interaction and decision-making applied to specific areas of disaster response.

PROJECT EQUIP was a highlight of the day. Mission, Service, and Justice had accumulated numerous tools and pieces of equipment after the two year Joplin tornado response. This equipment was distributed directly to our early response teams and their churches, none for private ownership. PROJECT EQUIP will enhance the capabilities of our response teams by providing them with such items as compressors, power washers, ladders, first aid supplies, hand and power tools, and much more. Through the conference-church partnership, this vital equipment is now in the hands of those closest to disaster response, the local church teams. The teams were overjoyed by these vital additions to their programs.

At the end of SUMMIT ‘2’ teams left better informed, better equipped, and more inspired for continued service in this very important ministry to survivors. Missouri is extremely proud of all of our responders and wants to continue to support them in every way possible.

If your church would like to develop a Disaster Response team for Early Response, Spiritual and Emotional care, or Recovery-Rebuilding, please contact Dan Steska, Disaster Response Coordinator at 573-441-1770 or visit www.umcdisaster.org and www.facebook.com/umcdisaster.