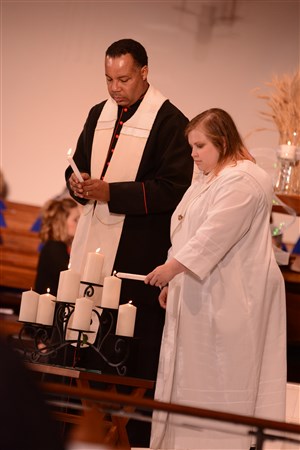 Three people with connections to the Missouri Conference were among seven  honored at the South Central Jurisdictional Conference on memorial service on Wednesday evening.

The Memorial Service recognizes the passing of Bishops, Bishop spouses and jurisdictional conference delegates. It was held at First UMC in downtown Wichita, Kansas.

Jerry Ruth Williams, former Missouri Conference lay leader, died in 2012. She had been a guidance counselor and worked at Southwestern Bell. She was a member of Green Trails UMC in Chesterfield. Chris Ricks served with the Missouri State Highway Patrol from 1971 – 2006. He was a leader in church camps and Walk to Emmaus. He was a member of Wesley UMC in Jefferson City. He died in 2014. Both Williams and Ricks served as Jurisdictional Conference delegates multiple times.

Great Plains Bishop Scott Jones was the preacher for the service, speaking on the paradox of leadership, noting that how Jesus advised that if you want to be happy, you have to give yourself away, citing the scripture Mark 10: 35 - 44.

"We all wouldn't be here tonight if we weren't ready to give ourselves away,” Bishop Jones said.

He went on to explain how he adamantly believes that Wesley Christianity is exactly what the country needs today. But every time he feels very clear about vision, he has to remember that it is not his church, but God’s.

“Too many people in leadership positions have decided to use those positions for themselves, and not for the common good,” Bishop Jones said. “Are you taking the form of the servant, emptying yourself for the good of others?” 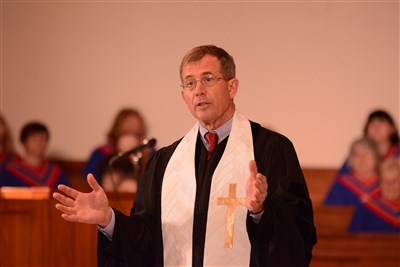 Jones noted that the church is in hard times. He didn’t foresee himself being Bishop in a culture that prioritizes Sunday morning soccer practice over Sunday school, or one in which people consider themselves devout if they go to church twice a year. But he also warned against longing for past days, in which the church may have been growing, but had many other problems.

Bishop Jones then showed a clip from Lord of the Rings, in which the Hobbit Frodo was telling the wizard Gandalf that he wished he had never seen the ring he was assigned to deal with, and that none of the trouble that had befallen them had ever happened.

“So do all who have received such times, but that is not for them to decide. All we have to decide is what to do with the time that is given to us,” Gandalf said in the movies.

“We need God's church and the Wesleyan movement to transform the world that we are living in today,” he said.

At the end of the service those gathered partook of the sacrament of communion, and lit candles of remembrance for people whom they were close to that were being honored.