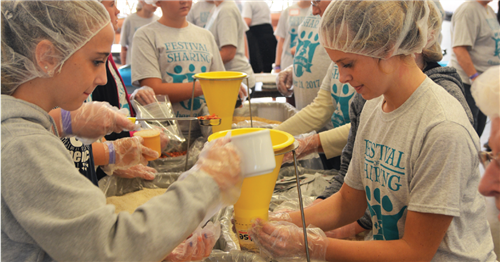 On the third weekend in October, youth through retirees gathered to carry out the work necessary to feed, clothe and comfort our brothers and sisters in need. This 36-year-old tradition was an opportunity for people around Missouri to share hope through their talents, knowledge, time and passion.

An aura of excitement filled the arena on Friday as time was spent checking Church World Service hygiene and school kits, setting up for the annual quilt auction, organizing the distribution zone and welcoming 400 youth and chaperones for Youthfest 2017. Volunteers included first timers as well as life-long supporters who have attended since Festival’s beginning, each one bringing unique talents and experiences to the table. Many people have made a tradition of coming with their significant others and later their whole families.

Around 7 p.m. on Friday hundreds of eager youth began filing through the arena doors. Their pent-up energy from the ride there was quickly released with the enjoyment of three ginormous inflatables and a gaga pit. Once everyone arrived, the group gathered for a performance by an ecumenical praise band from the Sedalia and Cole Camp areas. The youth were highly impressed.

No work began on Saturday morning until everyone came together for a worship service, which included the parade of banners. The band once again graced the volunteers with beautiful, soulful music before Rashid Sesay explained the impact Festival has on Heifer International. At the end, Tina Harris, Director of Mission, Service, and Justice for the Missouri Annual Conference of the United Methodist Church, blessed the day with a benediction and all were sent out for work.

Youth were eager to pack beans and rice, unload potatoes, and grow deeper in their faith. In a few short hours, 44,000 pounds of potatoes had been unloaded and distributed, 24,000 pounds of beans and 30,000 pounds of rice had been packed into boxes and taken outside for agencies to collect, and 25,000 meals had been packed for Rise Against Hunger. The day was not all work and no play. The youth had a couple of breaks in which they could play a round of gaga ball, visit the informational booths and engage in a reflection about their service.

At 12:30 p.m. many gathered to watch and bid on 107 exquisitely crafted quilts. The $27,000 raised will go towards purchasing blankets for those facing disasters. Around 3 p.m. activities were wrapping up. Youth groups began their journeys home while some volunteers gave even more of their time toward clean-up efforts.

In 2018 the Missouri Conference will be trying a new model for the Festival. Rather than asking donors and agencies to drive across the state to give and receive things being shared, the Festival will be occurring as a regional event at several locations across Missouri. This event is still in the planning stages. To learn how you can help the Festival spread out and multiply its blessings, email sowens@moumethodist.org.