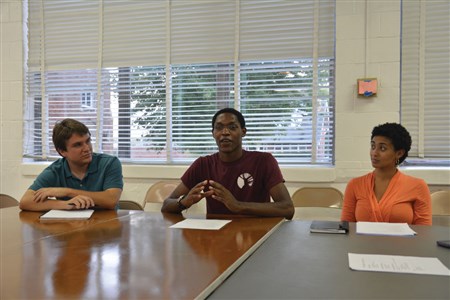 The first in a new series of monthly dialogues at the Center for Social Empowerment was a timely one. The center, located at Wellspring United Methodist Church in Ferguson, was facilitating a conversation about race and justice while St. Louis was still struggling daily with the aftermath of the not guilty verdict for Jason Stockley, the police officer who killed Anthony Lamar Smith.

“In light of the recent verdict in the Stockley case, now is the time, more than ever, to discuss race and justice,” stated the invitation to the event. “We understand the outrage, disappointment and fear, and we are calling for our peers to stand with us. Join us for a discussion on race, our justice system and the tension between them.” For the people who were involved in the Michael Brown shooting and civil unrest that followed, the situation felt familiar.

“My Facebook looks a lot like it did in August of 2014,” said Nicki Reinhardt-Swierk, coordinator for Institutional Readiness at the Center for Social Empowerment.

Reybren Fitch, community liaison and VISTA leader for the CSE, led the meeting and started by asking people to share their emotional reaction to hearing the verdict. He shared that as a young African-American man, the verdict left him with a feeling of resignation and a fear of driving a car.

“I thought I guess I need to just stay home or take a bus,” he said. “There is no reason someone wouldn’t do that to me if there are no repercussions. It is like getting a bill every week that you can’t pay, so you just start thinking about it less. It just is what it is.”

Others around the table shared feelings of anger, sadness, and vulnerability, but no one expressed a feeling of shock. They had all come to expect the situation would rule in favor of the police.

The next discussion questioned asked people to share how they had been engaged. Some said they were primarily engaging friends and family in discussions about policing and racial justice. Some had been at demonstrations. Kim McClain is a social justice advocate, and she feels guilty about not being able to protest as much as she feels she should.

“I’m not in a position to be arrested now, because I would have three kids at home without a mom,” she said. “It’s frustrating, because it’s going to take a lot of us getting arrested. I’m so grateful for the people that have the resources not to be afraid, who can take one for the team. I hate having to leave a demonstration when things start getting hot, but I have an obligation as a Mom.”

Fitch encouraged those attending to come back and bring friends, particularly friends who may not be like-minded so they can engage in dialogue around important issues, rather than just hearing from people who agree on everything.

The next CSE monthly dialogues will be November 9 on Policing in Ferguson and December 7 on Justice Over the Holidays Roundtable.

For more information on the Center for Social Empowerment, go to www.thecenterforse.com.