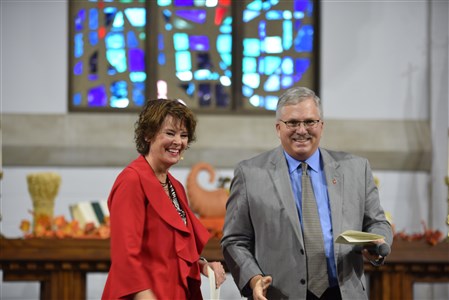 “She may have been the most surprised call I ever made,” said Missouri Bishop Bob Farr. “She was in the car when I called her and she had to pull over.”

Fowler was serving a church in the Southeast District, and thought she would be there “forever.” But not much of her life relating to the United Methodist Church has gone as planned.

She grew up a preacher’s kid, and had no intention marrying a United Methodist pastor, but her husband David followed a call to ministry after their deal was sealed. She served the church in various capacities since childhood, but ended up following her own call and was ordained elder in 2014. She recalled as a trembling, flushed public speaker being a pastor didn’t seem to make sense, but she learned to trust God. She now is leaning on that trust once again. Fowler was being installed as a Southeast District Superintendent at First UMC of Carthage on November 24, but she had been serving in the position since July.

“The first couple of months I felt like my life was coming apart when I should have felt like everything was coming together,” she said.

Fowler’s appointment to the Cabinet meant a move from one side of southern Missouri to the other, as well as two appointment changes.

The Fowlers have been a couple since their youth, and in high school were in the play Fiddler on the Roof together. She recalled Tevye’s line from the play, when he lamented to God: “I know, I know. We are your chosen people. But once in a while, couldn’t you choose someone else?” Fowler said she could relate.

“Sometimes I want to say God, or maybe to the Bishop, I don’t want to be chosen. But sometimes when you feel like things are coming undone they are actually coming together,” she said.

Fowler read 1 Peter 2: 4–10, and cited how Peter referred to the people of the church as being chosen to be in a royal priesthood. “We’re chosen to be the one’s representing God here on Earth. You can’t demonstrate God’s forgiveness by yourself. It has to be lived out in community,” she said.

“There’s a stage in the remodeling process where you walk into a house and you can’t tell if it’s coming apart or coming together. The church is coming together – the only question is will we be part of that temple. I can’t wait to see what God builds out of us.”