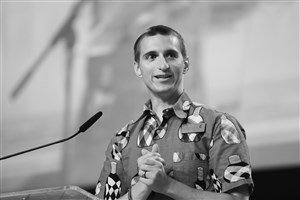 Rev. Yvi Martin, the Chair of the Mozambique Initiative Team, affirmed Stevenson’s enthusiasm, “It has been a record breaking year for the MI in a number of ways – wells completed, dollars raised. But our most significant work together is always the connections we make with one another across an ocean across cultures.”

Stevenson stressed this relational aspect of the covenant partnerships during his time on stage. He declared, “A highlight has been the excitement around covenant partners and hearing the stories of these Missouri churches who have experienced the connection and have the relationships with our brothers and sisters in Mozambique.”

The covenant partnership that is central to the Mozambique Initiative provides an example of discipleship the entire denomination can parallel. Continuously walking alongside brothers and sisters in Christ from a different culture teaches both Missourians and Mozambicans how to love one another while living two vastly different styles of life. Each partnership exudes love and respect for one another. 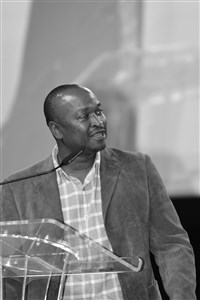 While MI proudly reports the abundant support they received in the past year, they emphasized how the only way this transformative impact occurs is through the personal relationships. Hearing how members of Missouri congregation’s lives are changed from meeting their covenant partnership testifies to the power of deep relationships.

Similarly, hearing the gratitude and unprecedented honor Mozambicans give their Missouri partners displays the radical love of Jesus to all active members of the partnership. With the new giving kits released at Annual Conference, Stevenson paved a way for churches old and new to continue supporting the Mozambique Initiative’s to transform people and their communities toward the image
of Christ.

As many people filtered through MI’s booth to meet Stevenson, his leadership appeared to all who interacted with him. Countless hugs were exchanged, and inquiries of new relationships formed. Martin applauds MI’s new director, “In just a short time, Craig has been able to revitalize many of these relationships. And ultimately unique partnerships like the MI lead us into the future.”

After the positive response at Annual Conference and the 2015 Programmatic Snapshot, the Mozambique Initiative’s future looks very bright.