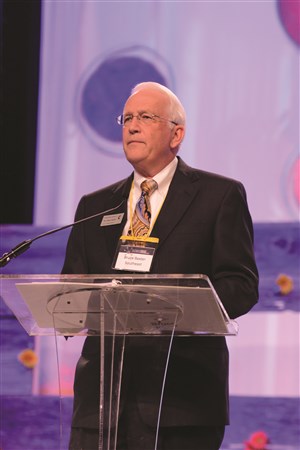 Rev. Bruce Baxter, chair of the Board of Ordained Ministries brought a report to the Annual Conference that was filled with news of progress and new initiatives. As the fourth year of the current quadrennium comes to a close this year, Baxter noted that it has been four years marked by an ongoing flow of work.

In 2015, the board received a task force report. The task force had spent 18 months considering ways to improve the processes of moving from a feeling a call to vocational ministry through answering that call and on to retirement.

The board began to implement changes last year. Baxter said the goal is to better align the work of the board and the Annual Conference. “The goal is to offer greater clarity, be more relational and more candidate-centric.” One example of change is that candidates now meet with one team, rather than four, for an extended time of interview and conversation. Baxter said there is also a process in place to allow the members of the Board of Ordained Ministries to become better acquainted with the candidates, beyond a single interview.

In the year ahead, changes will be unveiled at the District level, geared to ensure that the districts are aligned with one another and using a common approach in their work with candidates. Baxter also reminded those present that the local church is charged with the task of calling people to vocational ministry. “We are to have in our minds at all times the question, ‘Who do we discern might be called to ministry?’”

The Annual Conference is turning its attention to the Order of Deacons this session. Baxter pointed out that this is the 20th anniversary of the order in its current form and said work continues to better understand and support the variety of ways people are called to vocational ministry.

Also listed in the report is 12 continuing new church starts and two new starts, 15 satellite congregations, and two mergers. This year it is reported that there are 20 discontinued congregations.

Baxter announced that the Missouri Annual Conference has been awarded a one-million dollar Lilly Foundation Grant to implement a clergy financial well-being initiative. He credited David Atkins and the Missouri Methodist Foundation in securing one of two grants offered by Lilly and said the Foundation will oversee the project.