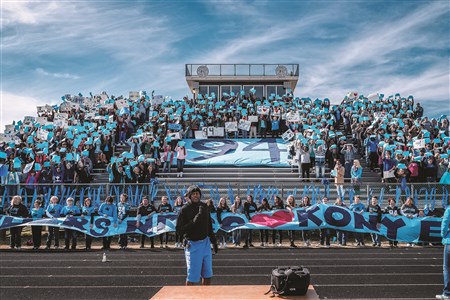 The Carolina Panthers were favored to win Super Bowl 50, and on that team was a second-year defensive end who graduated from New Madrid Central County high school in 2011. It was Kony Ealy Day at NMCC as I took this picture prior to the Super Bowl. In high school, Ealy had his sights set on the NFL and doing whatever it took to get there. His story is inspirational. And now, he makes Super Bowl history! He sacks Peyton Manning a Super Bowl record three times. He records a sack and an interception in the same SB, something never done before. He even forced a fumble, all this in limited action. He well could have been the game’s MVP if not for one thing. The vaunted Panthers lost as a team. How would we deal with this gut-wrenching lost opportunity?  On what would our reaction depend? Colossians 3:23-24 says, “Whatever you do, work at it with all your heart, as working for the Lord, not for human masters, since you know that you will receive an inheritance from the Lord as a reward. It is the Lord Christ you are serving.”