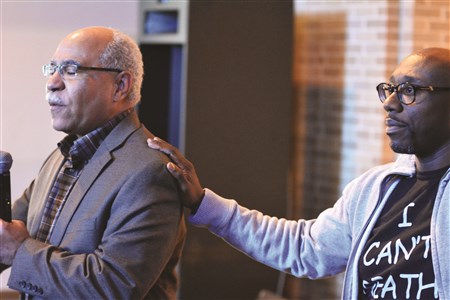 Three-day weekends were not one of the principal causes that Rev. Martin Luther King dreamed of. He did call for work, service and sacrifice. Wellspring UMC in Ferguson wanted to honor the man and his ideas this year by making it a day on, not a day off.

“This is the day that the Lord has made,” said Rev. Willis Johnson in his welcome to those gathered in the sanctuary. “I want to tell you all how much we love you, and show appreciation of the sacrifice and life lived so we may live today.”

The 10 a.m. worship service on January 18 began with a talk by Karen Kalish, who was stressing the importance of reading in early childhood development. She is concerned that young children who aren’t being read to are showing up way behind on their first day of school, and they have little opportunity to catch up.

“It takes all of us as a community to reach out and make a difference,” she said. 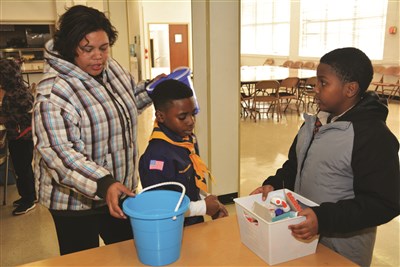 Rev. Cody Collier, special assistant to the Bishop for leadership development, brought the message, relaying how King wanted children to have a future, and wanted the world to be different.

“He knew he had to do more than preach and teach, he had to march,” Collier said. “Isn’t it strange that in 2016, with all of our accomplishments, we have such a long ways to go?”

He talked about how systematic poverty has left children as the hungriest group of people in the United States, single-parent homes are the norm, and mass incarceration of a disproportionate percentage of black men is rampant. He asked what King would be saying today.

“I think he’d be saying thank goodness some young people in Ferguson chose to stand up to injustice,” Collier said. “He would be asking us why we’ve been so silent on issues of race. We as a Christian community ought to be about the business of making every day better for those whose lives matter.”

He referred to the scripture Luke 10: 25 - 37, which tells the story of the good Samaritan.

“It takes courage to understand that everyone is our neighbor,” he said. “Most people ask, ‘What could happen if I stop to help?’ The Samaritan asked, ‘What would happen if I didn’t?’” Collier said. He called for people to show compassion.

“Compassion isn’t about giving a dollar, or what you do on one day. It’s about how you live your life. It’s about looking for someone who no one else sees,” Collier said. “Doing one thing for someone right now brings us closer to God.”

Following the worship service, those gathered engaged in service. Due to freezing temperatures that morning, most of the work was done at Wellspring, working on remodeling classroom space in the basement and organizing school supplies in the Center for Social Empowerment and Justice, which is located in the church’s education wing.