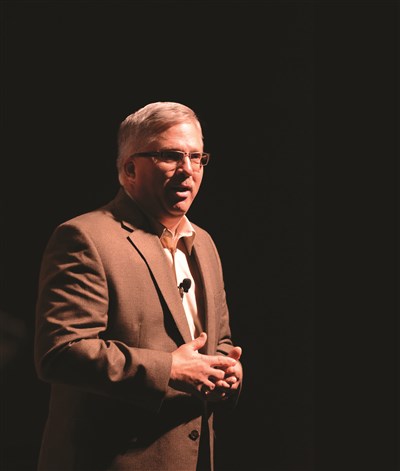 Missouri Conference Director of Congregational Excellence Bob Farr started his sermon on Sunday morning with a story about being a church visitor. He was there unannounced, and tried to remain anonymous. At first it was easy, as it was a “self-service” church.

“You know the type, no one greets you at the door, you have to find and pick up your own bulletin,” Farr said. “The thing about self-service churches is they do have reserved seating, so I tried to choose my seat carefully.”

A woman on the pew in front of him eyed him carefully, and then leaned over and said, “You’re somebody.” He said he was just in the area and had stopped by to visit. Later when the pastor mentioned there was a special visitor there from the Conference staff, she said, “See, I know you were somebody!”

“I said, ‘Isn’t everybody somebody?’” Farr said.  “Everybody is somebody, but the problem in a lot of our churches is that we act like we have to be one of us to be somebody.”

Farr’s grandmother with the first woman county University Extension Agent in the state of Missouri. He recalls going to the grocery store with her as a child, and she would stop and have a long conversation with someone else at the store. When they moved on, often when he asked who the person was, she would say she had no idea.

“She taught me a lesson I’m not proud of: how to fake it,” he said. “We’ve let the culture of fakeness come into our churches. On Sundays we have a hospitality routine, where we say hi to people as we look at the other people who we really want to talk to. We like to be with the people we already know.”

As pastor Farr helped build greeter systems. Looking back, he thinks he should have gone further.

“We need more than a greeter system, we need people who want to connect,” Farr said. “We don’t need more friendly churches. What people are looking for is a real friend, a real connection.”

Farr used the example of Lego blocks to illustrate his point. When the blocks are stacked squarely on top of each other they have a firm connection – you can barely pry them apart. But they don’t have any room to connect with other blocks. It’s only when that connection is offset, or loosened a bit, that connections to others can be made.

Farr concluded his sermon with a personal story about growing up in small, rural church. His father, fireman, never attended. He died fighting a fire when Farr was in his first year of seminary. He lives with the regret of the connection that could have been.

“Why didn’t anyone from that church ever go down to the fire station and start a relationship with my Dad?” he said.

It’s that kind of thinking that drives Farr’s ministry, and is why he’s always been comfortable as an itinerant pastor.

“Wherever you send me, I’m going to introduce people to Jesus Christ,” Farr said. “You need to get out of church and make new connections. Everybody is somebody in the church of Jesus Christ.”

A video of this sermon is available on Vimeo.