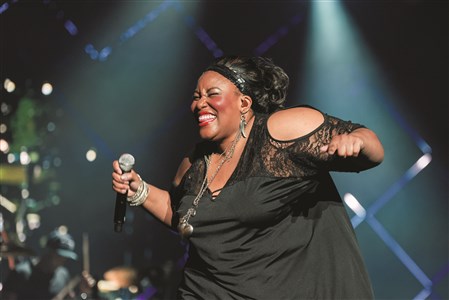 American Idol has long been a must watch in my home, and one contestant who has had a lasting impression on me along the way is Mandisa Hundley. This is a picture of her which I took as the house photographer for the Show Me Center in Cape Girardeau. Her voice is incredible, but so is the light of God within her. During Idol’s fifth season, Simon Cowell remarked on the singer’s size when he quipped, “Do we have a bigger stage this year?”

A person’s most vulnerable fears and struggles had just been laid out for millions to see. How did she respond? Let’s just say there was prayer and forgiveness and an important realization. Mandisa realized Simon’s hurtful comment was an opportunity for her to glorify God. And, she did as she even humbled Simon and received a hug from him. Please watch this on YouTube. Above is one of my favorite pictures I’ve taken of her over the years because I can see the joy of the Lord coming through in her performance. This is what true beauty looks like. May we so find ways to glorify God.