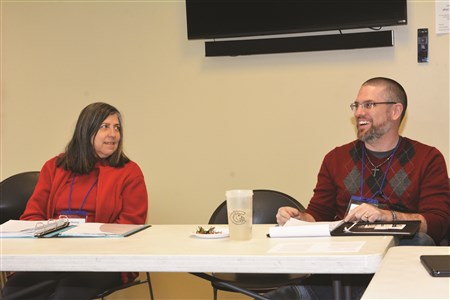 An important part of every Compass event is for pastors to have time together with their Journey Groups. Following each session with Nadia Bolz-Weber, the pastors broke up into their Compass Journey Groups to discuss what they had just heard.

Rev. Stephen George of Eldon UMC recalled that one of his seminary professors was adamant that your own life story should not be part of the sermon.

“It was interesting to hear her say the opposite,” he said.

Rev. Rob Barringer of Lifesong UMC in Reeds Spring said he finds it important to keep the message personal.

“I feel that when I tell people how messed up I am it gives them hope,” Barringer said. “When they know that their pastor is broken, it helps then get beyond image of perfect church people.”

Barringer related to Bolz-Weber as someone starting a new church, and the freedom that brings.

“When I started a church, it was the first time I felt I could be fully authentic, without preconceived notions of former pastors and who I should be,” he said. “We are calling our people to be authentic, so we don’t want to be putting on façades ourselves when we come into church.”

Bolz-Weber mentioned in one talk that she always preaches from a manuscript, which led to Journey Group discussions about sermon preparation and delivery, with responses ranging from a prepared manuscript, to no notes at all. Rev. Tom Vansant of Wesley UMC in Jefferson City said he tried just preaching from an outline, but it didn’t work as well for him.

“When I prepared the outline, I didn’t do the same degree of critical thinking that I do when I’m writing it out word for word,” he said.

Rev. Tim Schulte of Eureka UMC said he only does manuscripts for weddings and funerals. For the regular Sunday morning sermon, he internalizes the message. Rev. Monica Jefferson of Saint Andrew UMC in Florissant said she also internalizes her message, but she has notes handy on an iPad if she needs them.

“She’s a poet,” he said of Bolz-Weber. “It would take me a lot longer than her to write a sermon in that poetic style.”

The pastors find they have many shared experiences, but varied approaches. One person asked the group if anyone preaches from the lectionary. A few hands went up.

“We’re going to this summer,” said one. “That’s the only time we don’t do it,” said another. “With us, it’s just around transfiguration Sunday and Easter,” said a third.

“I preached the lectionary eight years, and came to a time that I felt redundant,” said one pastor. “Then I read what Adam Hamilton said about sermon series, and how a series can give your congregation a good way to invite others to church, so I started using sermon series.”

Another distinctive aspect of Bolz-Weber’s writing and speaking is that she uses profanity, which made some think she was trying to hard too be shocking. “What she said that shocked me the most it that she almost always preaches out of the gospel. At first I thought maybe she means the New Testament, but she meant the Gospel, as in four books,” he said.

That led to a discussion about the value of the Old Testament in the Christian church, with everyone agreeing that it has a place, but with different approaches to how it is applied. Rev. Stacie Stickney-Williams said she had been preaching from The Story (an abridged, chronological version of the Bible), but found it too difficult to go that long without the Gospels.

“You just can’t leave Jesus alone for 36 weeks,” she said.

Rev. Mike Cassidy said his church used to give a Bible to third graders, which he now considers a little irresponsible, considering how you wouldn’t want a child trying to make sense of the stories of rape and graphic violence that come up in the first book.

“It’s not like their parents were sitting down going through the verses with them,” he said.

Now they start third graders on The Story with matching curriculum that is written for their age. They spend a few years with that, and then in the sixth grade they start the process of going through some of the “tough stuff” in the Bible.

“I think you just explained why so many people only give out copies of the New Testament,” Barringer said. “When I got one of those, I always felt like I’d been ripped off.”

Barringer said his church has been doing Wednesday night books studies. Some of the men in the church spend a lot of time driving for work, and listen to the books on CD while they drive. Others are in construction or contracting, and have taken audio books with them to the job site to listen to while they work.

“It’s been a great way for people with limited time to read to stay engaged (with spiritual formation),” Barringer said. Some of the books they have studied include Good and Beautiful God, Crazy Love, Not a Fan and God’s at War.

Someone asked for a good resource to provide new members with an overview of Methodism. One person recommended Adam Hamilton’s Revival, another said Cokesbury’s Pathway to Discipleship.

Rev. Mark Kailbourn of Noel/Pineville/Southwest City UMCs in the Southwest District said those recommendations were just what he needed.

“I appreciate having these conversations about resources, because I’m in a corner of the state where there aren’t a lot of other Methodist pastors to ask about current resources,” he said. “It really helps to have a trusted person say ‘This works’. I can’t afford spend a lot of time and money reading books and curriculum that don’t go anywhere.”

Compass participants also gather for Saturday events (Regional Day Apart) four times throughout the Compass program. To align clergy/lay learning and integration of such learning into the congregation, Regional Day Aparts will also include (at the participant’s invitation) key lay leaders from the congregation in which the Compass participants are serving. For more information about Compass, click here.