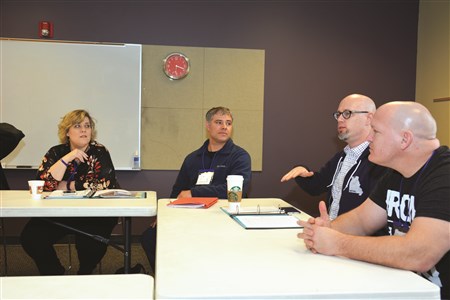 Compass is a Wesleyan leadership experience that aims to strengthen leaders of churches that seek to reach new people for Jesus Christ. It is structured as a two-year covenantal, continuous peer learning experience, designed to promote resources which strengthen a pastor’s spiritual life and pastoral effectiveness.

Over a two-year period participants will learn from nationally recognized leaders in eight large group gatherings. Four of those gatherings (Directions) will be 48-hour advance retreats around the conference. One of those retreats was February 22 – 24 at Platte Woods UMC, and featured Nadia Bolz-Weber.

Nadia Bolz-Weber is a Lutheran pastor of a church in Denver, Colorado called Home For All Sinners and Saints. She is the author of three books, and a nationally known speaker, calling herself a “Public Theologian.”

Bolz-Weber is a recovering alcoholic, and her spiritual memoir Pastrix is an open book on her transition from a hedonistic lifestyle into seminary and becoming a pastor.

Bolz-Weber joined the Missouri Conference for a day of Compass, presenting three learning sessions, talking mostly about her experience as a pastor, and her approach to ministry. Bolz-Weber considers herself a pastoral, not prophetic, preacher.

“My congregation staffs most of the non-profits in Denver. When they come to church, they don’t want a sermon about social justice, because they’ve been working on that all week and they are exhausted. They want to hear the good news,” she said.

Bolz-Weber considers scripture to have an endless reservoir of meaning.

“Scripture has brought meaning to lives for thousands of years,” she said. “To preach is to pull scripture into the dirt of our actual living reality.” 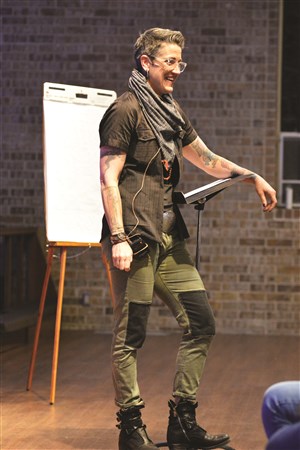 Bolz-Weber’s church is as unconventional as she is. The duties for the Sunday morning worship service are picked up by volunteers when they arrive.

“I never know who my associate pastor is going to be until I see him or her standing beside me,” she said.

Bolz-Weber is outspoken, expressing disdain for praise music. Her church sings hymns a capella. She spends 15 – 20 hours a week writing here sermons, which are never more than 10 minutes long.

“It takes a long time to write a sermon that short,” she said. “It would be much easier to write a longer one.”

The unconventional nature of the church created some challenges.

When it came time to adopt model constitution of Evangelical Lutheran Church in America to be constituted as an official church of the ELCA, they were supposed to put their people into one of four categories of membership. The church has never had members, and Bolz-Weber said the idea of membership goes against everything they do.

“We have a charge filled with demographic that doesn’t go to church – young adults- and it’s standing room only,” Bolz-Weber said. “Most congregations are 12 old people and their parents. We were asked to adopt their model constitution which worked in 1964. So we wrote preamble acknowledging differences our differences with the constitution, and created a fifth category of membership – participating members, or anyone who shows up. We never use the original four categories of membership. A member is anyone who comes who can fog a mirror or cast a reflection.”

Bolz-Weber started session three by giving her take on what happens in church after a tragedy hits the news, be it local or national. She said most churches respond one of three ways the following Sunday morning in church:

Bolz-Weber said her father called her after the shooting at the African American church in Charleston, very upset that nothing at all was said about the shooting the following Sunday in his all-white church.

At Bolz-Weber’s church, one Good Friday after covering a crucifix with tulips, they didn’t know what to do with the fresh-cut flowers, so they took them to a local site where someone had recently been killed. This evolved into a regular Good Friday liturgy at the church, in which they take tulips to somewhere that an act of violence was committed. Sometimes about 100 people process with the crucifix and flowers to the location of the tragedy.

Each of Bolz-Weber’s sessions ended with a question and answer session. One person asked how she dealt with being maxed out in her space and not wanting to grow when more people needed to experience the love and grace of Christ. Bolz-Weber acknowledged they had struggled with that, but felt that to move to a larger facility would take away from the intimate nature of their worship service. They tried multiple services, but she said the church felt disconnected.

“I’m OK with the size we are,” she said. “We have had people from our church go off to start other churches, so we’ve grown in that way.”

Someone else asked about her church’s finances. Bolz-Weber replied they talked about a capital campaign once, but they decided most of the congregation would just roll their eyes at anything resembling a themed campaign that most churches do. They ended up getting an old-fashioned offering board to put up in the church, that was originally acquired as kitsch, but proved to be effective. They now regularly share what the previous months expenses were, how much was given, and what percentage of the congregation is giving what percentage of the budget.

The key has been keeping expenses down. Home for All Sinners and Saints doesn’t own a building, they borrow space from another church and have worship services on Sunday evening. For the first several years, there was no one on staff other than Bolz-Weber. Now that the church is worshiping about 250 a week, and is connected to about 400 people, Bolz-Weber is half-time, and she has a full-time associate pastor who is the primary leader in the church. They also have an administrator, a camphor who is paid to work on harmonies, and a paid nursery attendant.

“We started in 2007, and I never had a secretary. We’ve just hired an administrator,” Bolz-Weber said.

One person said that she had heard a lot from Bolz-Weber about openness, inclusiveness and diversity, and how that had attracted a wide range of people. She asked what her congregation has in common with each other.

“We have everyone from atheist to evangelicals, but we all believe in open table and in grace,” Bolz-Weber said. “People in our community take care of each other in extraordinary ways. That’s what I wanted, but my focus was word, sacrament, Eucharist and preaching. The community flowed out of that. If I had focused on forming the community it wouldn’t have happened.”