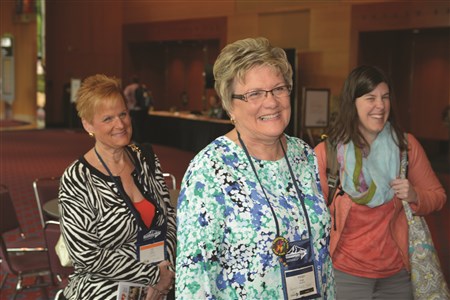 It’s been said that the real work of General Conference happens in the legislative committees. Except when it doesn’t. It’s not that people weren’t working, but most of the proposals for change that were to come before General Conference were defeated in committee, so they did not go to the floor.

“After Saturday night (when the delegation committee work was required to conclude), most of us were left with the question of what will we accomplish this week?” said Rev. Cody Collier, first elected clergy delegate. “I think many of us were left with the sentiments that have been expressed by Bishop Schnase – that we can’t expect renewal of the church to come from General Conference. We have to do what we can at the Annual Conference level.”

Brian Hammons, first elected lay delegate who served as leader of the delegation, appreciated all of the work they did in their legislative committees.

“We considered changing ‘shall’ to ‘may’ in many different parts of the Discipline,” James said. “None of it passed.” James was referring to places in the Book of Discipline that state shall, therefore putting either requirements or restrictions on Annual Conferences and churches. Similar statements that instead use the word ‘may’ grant permission, but don’t place requirements.

James appreciated the spirit of the people on his committee. “People worked hard, and got along well,” he said. “There seems to be a general trust issue, though. There’s a fear of giving, or giving up, too much power.”

Legislation that would have combined the Commission on the Status and Role of Women and the General Commission on Religion and Race did not pass.

“There were a lot of things that we were voting on that had no effect on the Central Conferences,” James said.

“When it didn’t apply to the Central Conference, people from there would vote against it. I don’t think it was a planned thing or a strategy, it was just things they weren’t concerned with, so they didn’t support change.”

James said on Saturday afternoon his committee received six referrals, all from the Committee on Ministry and Higher Education and Superintendency. None of these passed. 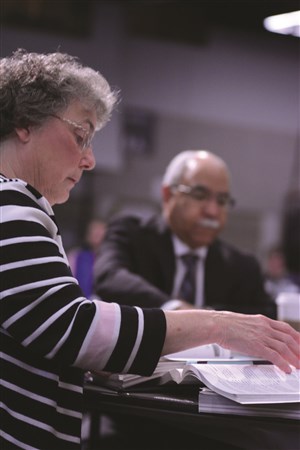 Plan UMC Revised, another take at a comprehensive restructuring plan that was passed but declared unconstitutional by the Judicial Council in 2012, was referred to the Connectional Table for a four-year study to be completed by General Conference 2020.

Dyke had hoped that the General Administration Committee could deal with the plan on their own.

“It’s hard to do a plan when you don’t have all of the pieces. Plan UMC was divided into nine committees, and they dealt with it nine different ways,” she said.

This is Dyke’s first time as a delegate. She’s disappointed that more progress wasn’t made.

“I’m always disappointed when we just kick things down the road for other people to deal with four years from now,” she said. “I like to get things resolved.”

Sometimes things get stalled over seemingly small details. Dyke said her subcommittee dealt with an issue of inclusiveness, and had long discussions over the meaning of the word “all.”

“It was brought up that if every group must be inclusive, we couldn’t have gender-exclusive groups like United Methodist Women, or age-exclusive groups, like youth groups,” Dyke said.

Dyke said several petitions relating to changing the number of Bishops were brought to her committee at the last minute, but were not even addressed so they died in committee.

“We all tried to hurry, but we couldn’t get through everything and ran out of time,” Dyke said. “There is such good intent to consider everything, and everyone was working hard. But we also recognized that you have to work carefully, and you can’t hurry to the point that you’re not being careful.”

This committee moved forward a budget of $599 million for General Conference. The original budget proposal was $611 million, but prior to General Conference the General Secretaries opted to reduce their agency budgets voluntarily.

Don House, an economist and lifelong Methodist from Texas, presented an amendment to pull $20 million out of the Church World Service budget to support a new Initiative of Strategy and Growth. This passed with a vote of 41 to 14 in committee.

“I’m not sure how effective this will be, because it still feels like a top-down approach, but at least he is trying something different to kick-start growth in other areas of our church instead of just doing business as usual,” Miofsky said.

When this made it to the main floor and Don House pitched the idea, he specifically named Missouri Conference Director of Congregational Excellence Bob Farr as someone he wanted on the leadership task force, along with a few others. Some people spoke against the plan, citing that it was not specific enough, and questioning if they could provide funding outside of the traditional methods of oversight. The vote on the plan was defeated.

There was one proposed amendment in the committee to cut the budget for General Conference by $14 million. It was defeated by one vote. (For more on the budget, see the story from this month's issue.)

Margie Briggs said her subcommittee experience was outstanding, far better than previous years. She brings a lot of perspective to the table – this is her seventh General Conference.

“We really had holy Christian Conferencing,” she said. “Everyone spoke, and everyone was heard.”

Her subcommittee unanimously passed one petition relating to suicide prevention, but because the main committee ran out of time before they could address it, it didn’t make it to the floor of conference.

All issues relating to same-sex marriage and homosexual ordination went one way.

“If anything was perceived as supporting LGBT issues in anyway, no matter what else was attached to it, it didn’t pass,” Briggs said.

Briggs said several Central Conference committee members looked to one person on the committee to see how they were supposed to vote, a practice that she found to be dishonest.

“Cheating is also incompatible with Christian teaching,” she said. “Afterward Jesus and I had a good talk. I’m feeling better now.”

Emanuel Cleaver III had to step out of committee work, but he had a good reason. His oldest child was graduating high school, and he had to make it home to be part of that. Andy Bryan sat in on the Faith and Order committee for Rev. Cleaver. The committee added to the United Methodist mission statement to include “extension ministry” to the end of the statement that refers to where ministry occurs. 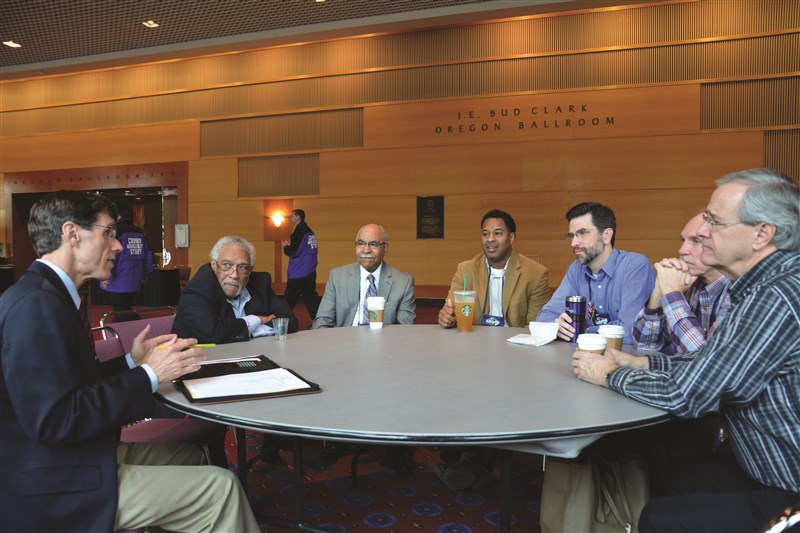 Fagan said that on issues relating to human sexuality, the U.S. delegates in his sub-committee were split down the middle, but Central Conference delegates tilted the total to the side of none of the changes passing.

The committee also considered several pieces of legislation relating to Episcopal accountability. Legislation was considered in the main session that would have changed the terms of bishops from life to eight years, with the possibility of being elected to a second term. This received a majority of the vote, but since it is a constitutional change it required a super-majority (2/3 vote) and did not receive it.

Mid-week Fagan mentioned it is important to keep a good attitude and hope as the week progresses.

“I keep in mind the words of our Bishop, when he cautioned against letting cynicism creep in,” he said.

Karen Hayden said her subcommittee considered changes in the language of a three-page long footnote in Paragraph 310 of the Book of Discipline that refers to what the church supports and wants for clergy persons.

“When it went to the larger committee body, hands went up from delegates from Germany, Korea and Africa. They didn’t understand what footnote we were talking about,” Hayden said. “We then learned that their Book of Discipline doesn’t have this footnote in it. That really brought home the challenge of trying to make changes like this as a global church.”

Hayden said when her committee adjourned, there were two large stacks of petitions that were left unaddressed.

“We had the most legislation out of anybody,” Hayden said.

Hayden cautions people from referring to social media for their “news” from General Conference, which can leave them with siloed information, rather than a well-balanced account.

“People need to keep in mind that social media posts are just presenting things from one person’s perspective,” she said.

Collier had previously served on this committee because it related to issues of the Superintendency, but this year those petitions were moved to the Higher Education Committee, overburdening that committee, but leaving Local Church comparatively light.

“We had 35 petitions to go through, plus another six that were referred to us from the Church and Society committee,” Collier said. “We got through them all.”

Some adjustments were made in language in the Book of Discipline, but little substantive change came from the committee.

“There is a real issue of trust, and people are afraid to make changes,” Collier said.

As Director of the Missouri Conference Center for Congregational Excellence, Rev. Bob Farr works closely with the General Board of Discipleship, particularly Path I, relating to new church starts and church revitalizations.

He chaired his subcommittee, which dealt with issues relating to Lay Servant ministries. His subcommittee got through all 19 of their petitions, and the whole committee considered all 51 petitions that were before them.

“It was a challenging experience, but went well. We primarily just made adjustments to wording and clarifications.” 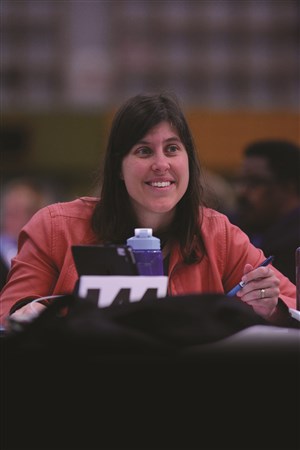 Jill Wondel found serving on the Global Ministry committee to be very affirming.

“The chair of our committee was from Detroit, but he had grown up in Nigeria,” Wondel said. “He had a good global perspective, and did a great job of speaking slowly and clearly, and making sure that everyone knew what was going on.”